As I sit to write this post I think back to the first posts that I wrote. How idealistic I was. How I thought that if I just tried hard enough if I just pinched my SNAP pennies, eating healthy would be, well a snap. It is possible to live differently. It is not easy and having a dose of privilege is a big help too. Now as all this controversy swirls around the proposed cuts to food stamps I want to share some simple truths with anyone who is willing to read them.

My family eats as healthy as we can. It's not because I have some high ideals or because I'm morally better than other food stamp recipients. Frankly, it's because I'm sick. I started on this journey because one day while sitting in my doctor's office after being diagnosed with fibromyalgia my doctor said "I can't guarantee that what you eat causes what's wrong with you but you need to start eating as organic as possible". This wasn't totally new information to me, by then I worked at a natural food co-op, the question was how do I afford that. We were having a hard enough time just trying to have balanced meals (that was something we had committed to years before). Now people will tell you that that's a fiction. That if poor people really want to they can eat healthy. They will point to studies and week long experiments that say people can eat healthy on a food stamp budget. I am telling you my lived experience tells me that they are wrong.

Here's why- good food costs money I have always said that on this blog. Yes there are ways to maximize your budget. However, when you are working with three dollars per person per day for your food budget please explain to me how you are supposed to have a healthy balanced meal three times a day with snacks. Not to mention meals devoid of processed foods and unhealthy foods.

The reason I say devoid of processed foods is because I keep hearing and seeing people say poor people who were on SNAP should not be "allowed" to buy "bad food" or "junk food". Let me share a secret in order for my family to eat healthy- I have to be strict about how much we eat, what we eat, and no junk snacks. That means literally telling my kids they can't have second helpings or giving them my food meaning I don't eat (people are probably surprised by that because I'm fat but my kids eat far more than I do). That's because a healthy food budget doesn't allow for the cheap things that keep poor people full.

Something I thought about the other day while watching liberals on Facebook discuss how people like me shouldn't buy this or that is how often the fights my kids have are about food. I mean that. My kids often fight about food. Don't get me wrong my children are not starving they are often still hungry (starving and not full are two different things). This is what happens when fruit is a luxury and second helpings can be too. Candy in our house can start a riot not only because it's rare but because once it's gone it really is: gone. Someone actually thought I didn't feed my kids once because my youngest often begs for the junk food she sees everyone else with.

I'm not sure if people realize that with three dollars a day people on SNAP who have food restrictions and dietary needs cannot meet them. People like my children who have food allergies. Which means food stamp staples like tuna and peanut butter are out of the question for them. People like my mother who has such complex needs I can't even list them all. People like me who has fibromyalgia and suspected lupus whose very illness is impacted by diet.

We are the people who some people seem not to have compassion for only shame and contempt (epic side eye to you Eric Cantor). Thing is with the country in an economic downturn the likelihood of you knowing someone on food stamps is really high. The likelihood of you knowing someone who has benefited from food stamps in their lifetime is really high.

Far from the caricature of the "welfare queen" we are normal people most of us have jobs, we are good parents, we are caregivers, we are productive members of society. I am not sure what kind of people write off the whole groups of other people as unworthy of having food. I will say if you are one of those people I'm not sure I want to know you.

Posted by SmartStatistic (Laurie Bertram Roberts) at 12:14 AM 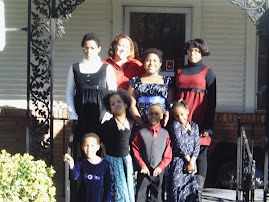